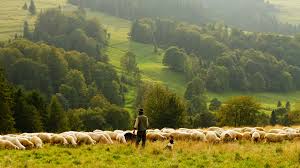 Are you familiar with her?

Her first husband was Nabal.  He was extremely wealthy.  He was a mean, sloppy drunk.  His name literally means “fool.”

Abigail had to make amends to their neighbors on the regular because her husband was such an ornery cuss.  The choices he made make it obvious that his number one priority was money and stuff – stuff that had value, which meant more money.  He treated his wife much like angry drunks treat their wives in this day and age, with contempt and disrespect.  My first reaction to this information was that of an upper-middle class white woman of the 21st century.   I kept thinking, “Why in the world did she marry this guy in the first place?  He was abusive, embarrassing,  not attentive to his wife.  What did she see in him and why, oh why was she still married to him?!”

Well… Abigail didn’t marry Nabal a few years ago.  She married him in a time when men made the decisions about such things.  Parents chose mates for their children based on their stations – how much land they owned, how much wealth their families had, etc.  It wasn’t a really big deal if a husband took out his frustrations of the day on his wife, with his angry words and/or hands.  Wives were acquisitions, more like property than partners, especially when their husbands were insecure and broken, as in the case of Nabal.  The part that still confuses me is that Abigail loved and served the same God that I do, but her husband did not.  My Bible tells me that Nabal was a “son of Belial,” meaning he followed this false god  who was known as a devil, and not at all the same God his wife served.  Her actions and conversation in the Bible make it apparent that she was raised in a Jewish home with parents who loved God and trained her well in that belief, although, I can find no evidence of who her parents actually were.  It seems strange that who her future husband worshiped wasn’t a deal breaker in her father’s decision.  It makes me wonder if her parents had passed away or became destitute, and she had no other choice.  By all accounts, Abigail was a beautiful, very wise and kind woman, so it’s not difficult to imagine why Nabal would marry her.

She was married to Nabal, who was despised by his community.  He was selfish, greedy and a volatile alcoholic.  There is no mention of any children between them.  He offended their neighbors frequently, and Abigail was known for wisely making amends without dishonoring her husband in the process.

During the time that Saul was after David and both were claiming to be King, David and his men were protecting Nabal’s livestock in the fields.  During the time of festival, David sent word to Nabal, who was shearing the sheep David and his men protected, that he and his men needed food and he humbly requested that Nabal return the kindness and feed him and his hungry men.  The response David received was insulting, at the very least.  He indicated he didn’t even know who David was and suggested that he could be one of many escaped slaves.

Upon receiving this response, David, told his men to sword up because they were going to visit Nabal’s home, where they would kill his entire family and his servants and their families.  One of the servants reported to Abigail what had transpired.  She assured Abigail that David and his men had been wonderful protectors in every way, that Nabal had wronged them, and urged her to fix things or they would all perish.

Abigail quickly loaded up plenty of food for David and his men with her servants’ help and without a word to her destructive husband, rode out on a donkey to meet the hungry, angry men.  I just love the way she got things done without a bunch of hoopla or drama.  She saw the problem, and was SO connected to God and His will, she knew just what to do and how to do it.  She intercepted the men and instead of arguing with David or justifying anything, she told him how much they were owed because of their hard work and protection.  She bowed down before him, with her face to the ground.  She connected with David by telling him she had been treated disrespectfully by her husband for years and that Nabal was a fool who was followed by folly wherever he went.  She then prophesied over David the blessings that the Lord had for him in the days to come:  becoming the true King, and a man who pursued God with all of his heart who would leave a lasting legacy.  She reminded him that killing Nabal’s entire household would only mar his reputation and his future as a respectable king… Brilliant!!  David and his men accepted her generous gift and he sent her home with a blessing over her.

Upon arriving home, her husband was very intoxicated and had guests over, so she decided to wait to tell him what has happened the following day when he would be fully present and less reactive from his alcohol consumption.  Upon waking, Abigail told him everything.  My Bible tells me that his heart failed him, he then turned to stone and about ten days later Nabal died.

When David heard the news, he rejoiced at God’s justice and then he sent word to Abigail that he desired to marry her.  She went willingly, even happily.  They had a son together and I’ve no doubt Abigail lived a much happier life than she did married to Nabal.

It’s funny.  When I first starting studying her, I was shocked to realize that the Abigail who was married to Nabal was the same Abigail who was married to David.  I just didn’t put it together.  She was such a leader, wise, kind, strong, brilliant, and beautiful.  I wish the Bible told us more about her life.  That she stayed with her abusive husband until he passed away is quite a feat.  That she worked so hard to keep their people safe and respectable is impressive.

I love that she didn’t play the victim in a situation that could’ve warranted such behavior, especially in the time she lived in.  She didn’t become bitter or turn inward.  She chose to think of others and see the big picture while putting out her very difficult husband’s fires pretty regularly.

Abigail challenges me not simply because she was kindhearted, wise, and possessed so many other virtuous characteristics, but more so because she was so connected to Our Father.  This is where we find our wisdom because we seek His will and not our own human and often self-serving desires.  This is where we see others through the correct lens and extend love and kindness without judgement and with humility.  I know that I often try to feel overwhelmed by doing all of the right things at the right time in the right fashion.  When I slow down and stop trying so hard to DO and I, instead, spend time BEing with My Father, the other things usually fall into place, and even when things get crazy (because things WILL get crazy for everyone here and there if you’re a human being), I’ve found that if I look to examples such as Abigail’s, I need only to be in regular, intimate relationship with Him to make wise and thoughtful choices.  Choices that He leads me to are always best for me and for the situations I find myself in.  I know this may seem like an oversimplification, but I believe that when I’ve struggled the most, I’ve been the farthest from Him.  I get busy with the wrong things, I don’t make Him a priority, I sabotage my relationship with Him for various reasons, laziness, brokenness, busyness, etc. and then when the big junk comes, I’m trying to figure it out on my own or by asking everyone’s opinion, except My Father’s.  Have you been there?  I think we all have.  Sometimes I beat myself up because I believe I shouldn’t still be wrestling with this at my age.  That’s just where satan wants me, so it’s imperative that I pick myself up and spend some time with my Father who loves and forgives me without condition.  I’m not Abigail, yet, but I’m thankful for her example.  I’m His beloved daughter.  I’m not a quitter and I’m no fool.